Steadicam in the Shadow of the Great Wall

The Mutianyu Great Wall Hotel must have been one of the most spectacular locations for a Steadicam Workshop ever and this was the venue for the first ever Gold Workshop to happen in China in early October 2019. The hotel sits at one of the access points to the Great Wall and from many parts of the location it is possible to see The Wall snaking across the mountain tops.
The Workshop and venue were primarily organised and hosted by our partner Gension Engineering in the guise of Dennis Qian and Amy Liu who have been hugely supportive over the years. Gension have made great inroads into the broadcast industry in China for Steadicam and also provide an excellent back up service.

The scenery around the hotel may have been spectacular but the hotel itself is cut into the hillside with a myriad of small courtyards and stairs making for great locations as a background to workshop shots. The terraced front “garden” featured small bridges and planted areas which were used to great effect under the bemused gaze of the passing Great Wall tourists. The number of stairs just for moving around the hotel from place to place was challenging without a Steadicam so it was fortunate that not every shot location had to include stairs. 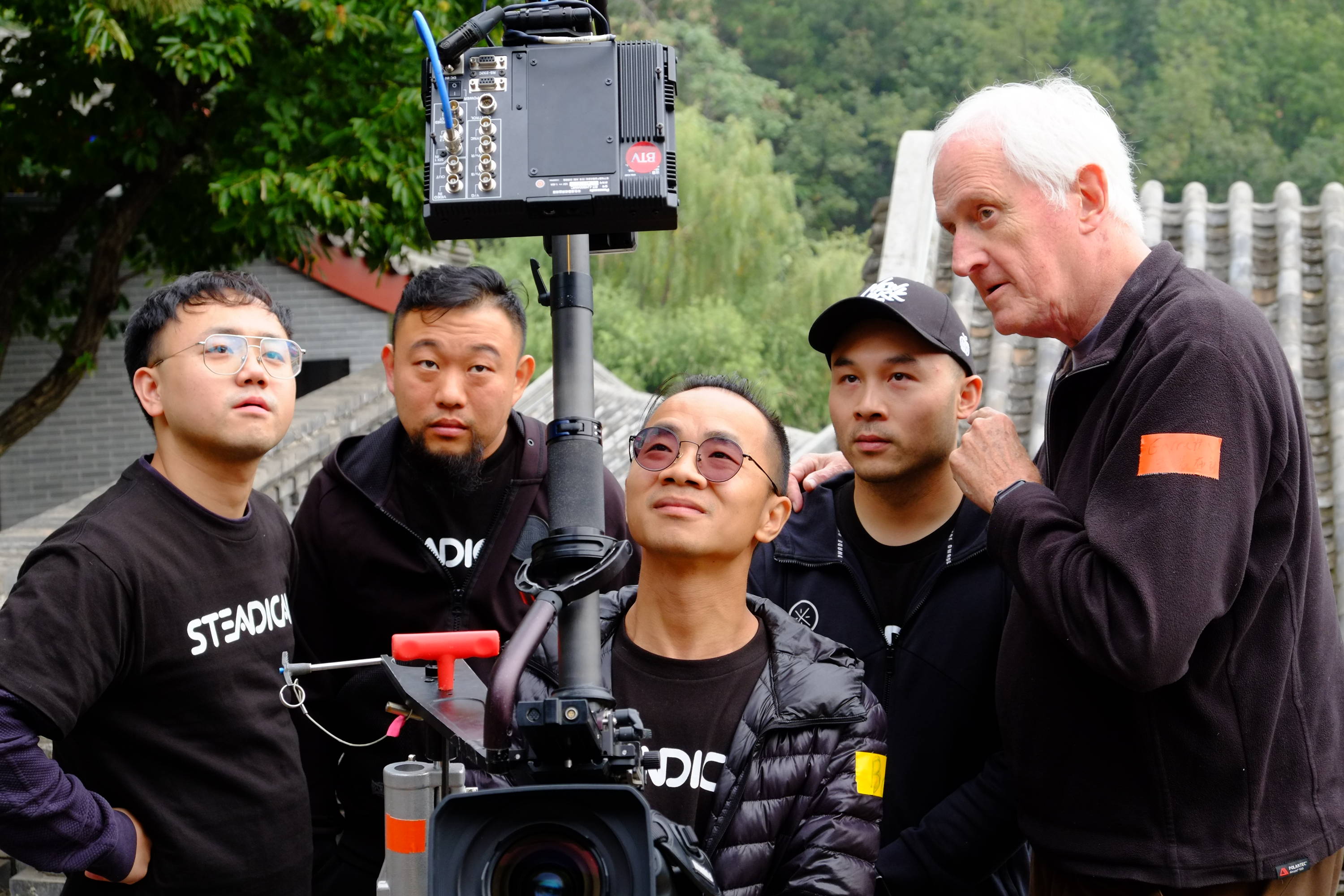 It was truly wonderful to be able to have Garret Brown, inventor of the Steadicam, as an instructor along with Jerry Holway as lead instructor. Group instructors were Chris Fawcett, Wan Zhong Wei and Robin Thwaites, plus local operator Jiang Li helping with translation. Many of the students were from a multi-camera television background with just a few from the narrative movie and commercial background; however, even students with a considerable amount of experience showed a great willingness to learn and a thirst for knowledge as to practices in the rest of the world.

As usual for a Gold Workshop the schedule was busy to the point of being punishing. All-day practical exercises of one kind or another followed by an early dinner and then evening lectures and demonstrations. The first day started with learning to get comfortable wearing the Steadicam and basic posture followed by line exercises involving precision starts, stops, passbys, and switches. Later came a classroom lecture followed by practical exercises in balancing the Steadicam. 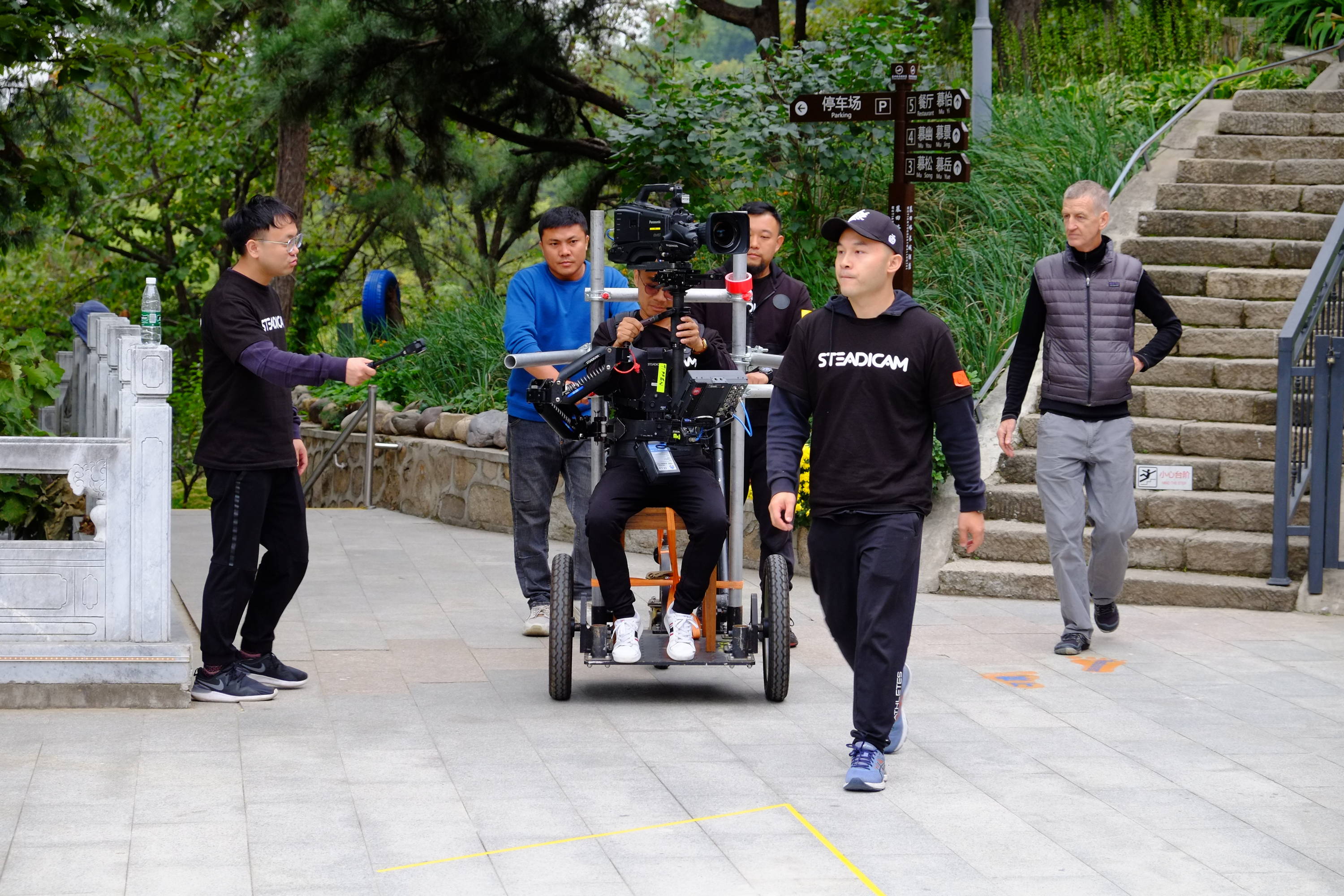 Days two and three were very much about how to make a shot with four different scenarios and locations around the hotel and the four groups each rotating between them under the sharp eye of the various instructors. Day four introduced the concept of Low Mode where the camera flies low to the ground and also operating “wrong side” or at least the opposite side to normal for each student. Day four was also the day that the students experienced riding vehicles rather than having to carry the Steadicam in the form of a neat all-terrain buggy where the operator sat on the back with the rig hard mounted, and also a rickshaw designed to allow the operator to step on and step off. The great advantage of this is that someone else does all your running for you.

Day five came - the day of the dreaded test shot. Each person in each group recorded and reviewed the same shot critiqued on all aspects of operation. The standard was very high and was contributed to greatly by some very enthusiastic acting but it certainly increases the level of nervous tension when the little red recording light is on. 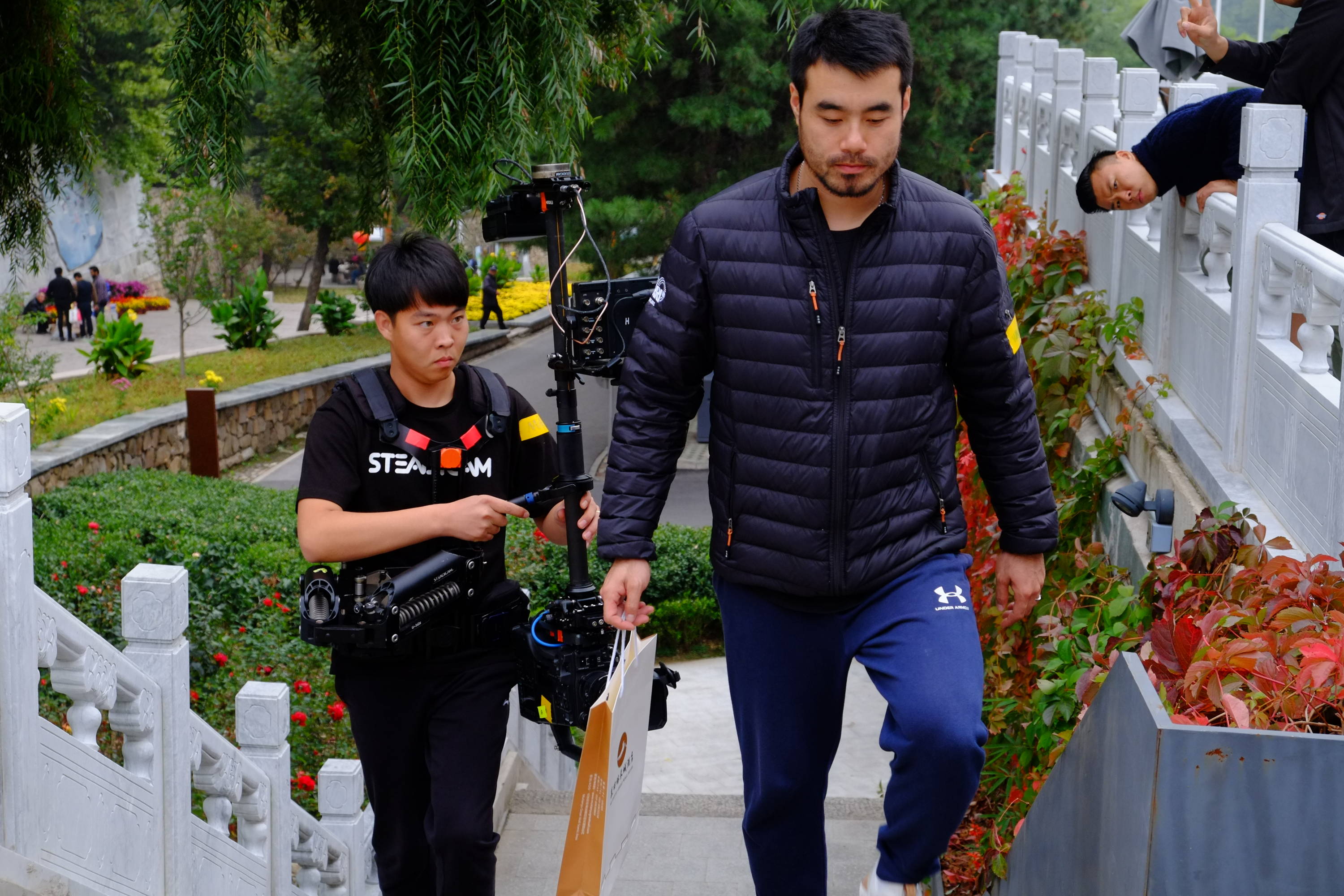 The last day brought the opportunity to re-visit the test shot in the morning and correct any mistakes from the previous day. Students not doing this were occupied with challenging “courtyard” exercises or consolidating technique.

After lunch it had to be done. All students, instructors, helpers and our host took the Steadicam systems with cameras and commenced the journey to the Great Wall. From where we were at the hotel this would seem like a tortuous and exhausting trek; however, after around a hundred and fifty metres we boarded the cable car that took us to the access point near one of the towers along the Wall. The whole area was bustling with visitors but despite this hundreds of photographs were taken and committed to WeChat. Garrett Brown was almost mobbed for selfies even by complete strangers who, while not students, had heard of Steadicam. Also, many group photographs were taken either with just students, students and instructors, or other combinations with the Great Wall snaking into the background.

The group dissipated after this with some walking to take in some of the views and grandeur of the Great Wall and some returning to the hotel with the equipment. A bit of a break followed and then all off to the wrap party where we were treated to Chinese barbeque with much toasting with fiery baijiu in the traditional way.

Next morning was time to say goodbye and return to our various homes with the good warm feeling of a successful workshop, new friends and a huge amount of fatigue!

If you are interested in taking a Steadicam Gold, Silver, or Bronze workshop, visit the Tiffen event calendar to learn about the next workshop near you.